Da Vinci did a good thing! High-priced furniture will be reorganized

According to industry insiders, Dongguan furniture has been divided into two sides due to the Da Vinci incident. The furniture industry will face a reshuffle. At that time, enterprises with unfavorable operations will gradually close down. There are media reports that some imported furniture does have the problem of arbitrarily high prices. If consumers buy OEM or domestic-made foreign furniture for a large price, they will bear huge economic losses.

Da Vinci high-priced furniture "foreign brand" identity fraud is about to "full-term". According to industry insiders, Dongguan furniture, which accounts for 70% of furniture exports in China, is divided into two sides due to the Da Vinci incident. On the one hand, furniture with "foreign names" is unsalable, and on the other hand, some local high-end brands have quickly seized the market vacancies given by Da Vinci. In the eyes of many people in the industry, the Da Vinci incident has left Dongguan furniture companies, which account for more than 70% of processing trade exports, under the shadow of an unprecedented "winter". Ma Yibo, general manager of Olive Tree Furniture Co., Ltd., admitted that even if Da Vinci does not happen, the situation of the furniture industry in Dongguan is not optimistic under the overall economic situation in China and the trend of the real estate industry, but the Da Vinci incident Occurs even worse. He believes that this autumn, the furniture industry will face a reshuffle, by which time unfavorable businesses will close down, "the market order of the entire furniture industry will become more fair."

After Da Vinci, the European and American imported furniture markets have had mixed reactions

The Da Vinci incident erupted nearly a month ago, and the aftermath it brought was constant. Especially for pure imported high-end furniture, Da Vinci's lessons should be absorbed by other colleagues. Recently, the reporter visited several high-end imported furniture shopping malls in Beijing and found that the major imported furniture brands had mixed reactions.

According to a veteran in the furniture industry, who asked not to be named, the real importer has two things that can be provided, one is the "certificate of origin" of the product; the other is the standard clear price tag. Generally, the main substrate, fabric, lacquer, and even the materials used for the details should be described on the label. However, in order to maintain the mystery of imported furniture brands, especially as high-end imported luxury furniture, the general practice is to choose to mark or not mark. Out of consideration of brand marketing strategies, some luxury brands are not likely to sell "Made in China" products in China, in order to maintain the mystery of luxury from a spatial perspective. The practice in the luxury industry is to keep the production and sales of products in a cross-cutting state.

ã€€ã€€ Lu Shui (Sales Director of Rocheburg Furniture China): The shipping cost from abroad to domestic is not the most important. A container may require several thousand yuan, but the customs clearance procedures for entry and exit, truck transportation in inland Europe After adding various packaging costs, the cost will definitely increase a lot than in Europe. At the same time, the agent must also bear the risks that the product may encounter during the shipping process to ensure that the customer receives it intact.

We once met a customer who bought a bookcase in Rocheburg, France, worth hundreds of thousands of yuan. All the procedures and transportation need to be handled by themselves, but it is finally found that it is bad after opening it back to China, then this The loss will be borne by himself. When buying domestically, these costs are borne by the merchant, so the price is naturally more expensive than Europe, but expensive does not mean that it is profiteering, and our domestic retail prices are all based on the comprehensive consideration of cost and local market consumption. Developed after the ability.

Wan Hualong (General Manager of Chanel Livable International Furniture): Generally speaking, it is normal for the gross profit of imported furniture to remain at around 40%. In fact, the prices of some high-quality domestic furniture are not lower than those of imported furniture. Now some domestic furniture company owners also have foreign life experience and have a better understanding of foreign furniture culture, so the products they produce are also favored by the market.

Recently, high-end furniture brand "Da Vinci" furniture is deeply trapped in "counterfeit doors". It is shocking that not only products but also pedigrees are counterfeited. Da Vinci's embarrassment for the company that dreams of becoming a high-end brand is that its furniture is as high as 10 million, and the cheapest is hundreds of thousands. The endless quality problems cannot stop it from becoming a high-end brand favored by high-income people. What is incredible is that whether it is the authoritative report of CCTV or the self-clarification of the Da Vinci conference, people still have no clue about Da Vinci's life experience: domestic brands export to domestic sales? Is it an Italian luxury product?

According to industry analysts, the "Da Vinci phenomenon" not only reflects China's huge high-end consumer market, but also reflects the consumer's mentality of admiring foreign consumers, making it suffer from the embarrassment of high-priced consumer foreign brands, but it is deep. The core problem at the level is that China lacks genuine high-end brands.

The knife tool rack has plastic tool rack, Stainless Steel tool rack and magnetic knife holder. We mainly produce and operate magnetic knife holder. We also call it Wall Mount Magnetic Knife. According to the material, it can be divided into Stainless Steel Magnetic Knife Holder and wooden magnetic knife bar. Our stainless steel magnetic cutter frame uses all stainless steel drawing shell, beautiful and generous, anti aging and anti-corrosion. It has such Powerful Magnet that the knife won't fall off. Our wood magnetic knife frame, shell use insect proof. The material of anti bacteria, the wood products treated with anti-corrosion and insect proof. In addition, our magnetic tool holder is built with strong magnets to increase the area of adsorption and enhance the magnetic force. We support the customization of various sizes of magnetic tools. 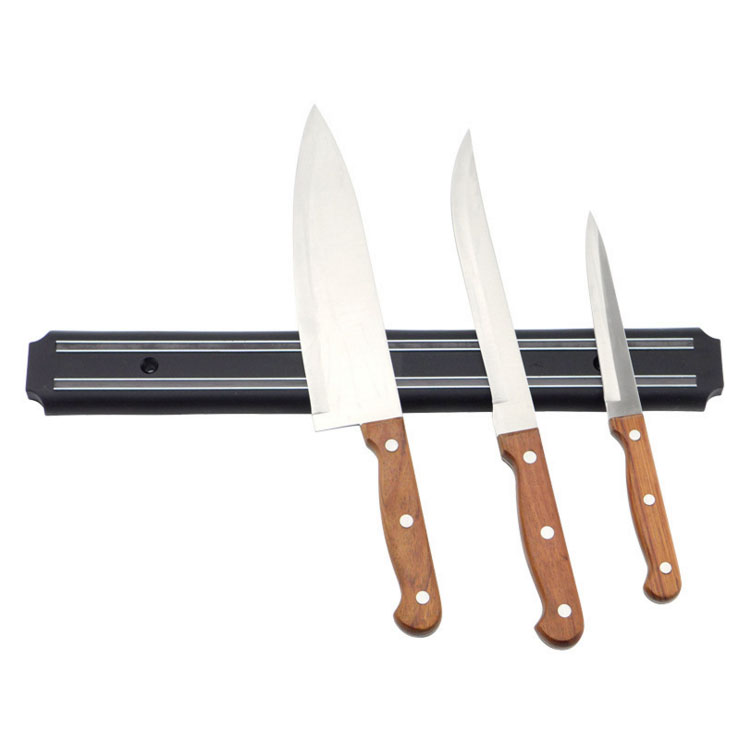