Electrochemical energy storage technology is the key to solving the problems of connecting electric vehicles and renewable energy to the grid. Lithium-ion batteries with organic solvents as electrolytes have advantages in terms of energy density, but there are safety hazards and limited lithium resources. In contrast, non-lithium ion (such as sodium, potassium, zinc, magnesium, etc.) batteries have advantages such as high safety and low cost, and have important application prospects in the field of energy storage. Since 2013, the Lithium Battery Engineering Laboratory of the Ningbo Institute of Materials Technology and Engineering, Chinese Academy of Sciences, has previewed a new concept battery study for non-lithium-ion batteries, and has made a series of progresses in basic research on new concept batteries for water-based ions (Scientific Reports 2013 , 3, 1946; ChemSusChem 2014, 7, 2295; Advanced Energy Materials 2015, 5, 1400930; Scientific Reports 2015, 5, 18263; Nature Communications 2016, 7, 11982). However, the cycle life of water-based ion batteries is relatively limited, generally less than 1,000 times, and it is difficult to meet the needs of large-scale energy storage. In 2015, Professor Dan Hongjie from Stanford University in the United States reported a new type of aluminum ion battery in Nature (2015, 520, 324). Due to its characteristics of durability, low flammability, and cost, it attracted extensive attention from academics and industry.

Inspired by this work, the Lithium Battery Engineering Laboratory of Ningbo Institute of Materials conducted research on aluminum-ion batteries with graphene as an electrode. Recent research has shown that Large-sized few-layer graphene enables an ultrafast and long-life aluminum-ion battery to be The title was published online in Advanced Energy Materials (DOI: 10.1002/aenm.201700034). In this work, researchers used mass-produced multilayer graphene (produced by Ningbo Mexi Science and Technology Co., Ltd.) as a flexible positive electrode, metallic aluminum as a negative electrode, and an ionic liquid as an electrolyte, to construct an ultra-long cycle life and ultra High rate performance of 2 V aluminum ion batteries. It has been found that the thickness (number of layers) and transverse dimension of the two-dimensional flake graphite anode material have important influence on the embedding behavior of AlCl4- ions. Compared to the flake graphite layer with thousands of layers, the number of layers of multilayer graphene is very small (less than 10 layers), which can significantly reduce the activation energy of AlCl4- ions intercalation and diffusion, resulting in ultrahigh rate performance of the battery. Charge and discharge can be completed within 1 minute. On the other hand, electrodes made of larger-scale multilayer graphene have better resistance to repeated insertion and extraction of AlCl4- ions due to better flexibility and graphitization, thereby allowing the performance of the battery. The long cycle life is almost no attenuation after 10,000 charge and discharge cycles. In addition, the research work further reveals the intercalation chemistry mechanism of AlCl4- ions in multi-dimensional graphene, graphite, and other two-dimensional graphite cathode materials through a series of fine characterizations, ie, intercalation ion-induced fourth and fifth-order structures. Change mechanism. The research work not only has important guiding significance for the selection of graphite cathode materials in aluminum ion batteries, but also has great academic value for the development of practical graphite-based novel long-life energy storage batteries.

Zhang Yuan, the first author of the research work, is currently studying for a doctoral degree at the University of Texas at Austin. 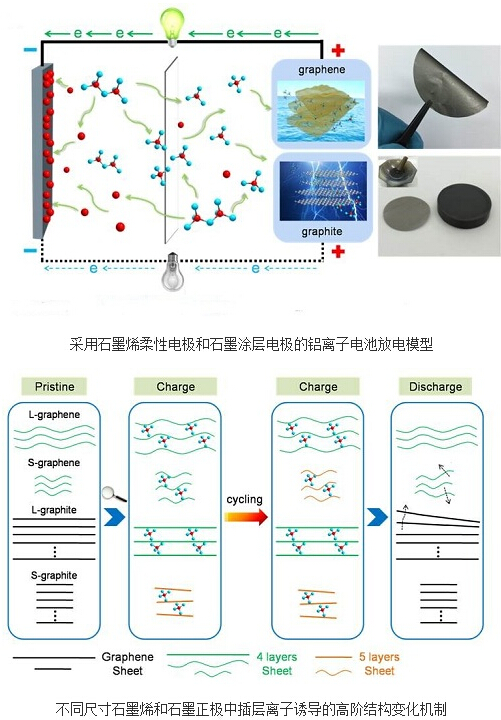