Tungsten, as a strategic resource, is widely used in various fields of national defense and national economy. However, tungsten reserves in the world are very few and the degree of protection is not high. Many countries have included it in the list of strategic reserves, and their status is very prominent. This paper briefly introduces the global distribution of tungsten ore deposits, tungsten reserves, changes in the supply and demand of tungsten ore, analyzes the global supply and consumption of tungsten resources in the past 10 years, and uses the linear relationship between resource consumption and GDP to forecast global tungsten consumption in the next five years. With continuous increase, China's tungsten consumption will also grow rapidly. Finally, according to the current status and future changes of tungsten resources in the world, we provide some suggestions and countermeasures for the development of China's tungsten industry from the aspects of tungsten resource advantages, policies, consumption, and offshore exploration investment. It is hoped that through the analysis of this article, it will provide certain reference value for overseas mineral exploration investment.

Tungsten is a very important strategic metal and is called "industrial tooth". With high melting point, high hardness, high density, good conductivity and thermal conductivity, and small expansion coefficient, it has important and extensive applications in aerospace, military, steel, automotive, machinery, petrochemical, mining and other fields. Tungsten is mainly used to produce hard alloys and tungsten steels, tungsten materials, etc. Tungsten metal and titanium, cobalt, and tantalum alloys are used to make cutting tools; tungsten alloys and nickel, iron, and copper are used as tungsten alloys for aerospace gyroscope rotors and counterweights. , Damping devices; Armor piercing core for conventional weapons; Shielding devices and components for radiation protection; Die-casting molds for mechanical manufacturing, flywheels and pendulums for automatic watches; contacts and electrodes for electrical equipment. Some of tungsten compounds can be used as fluorescent agents, pigments, dyes, and the like. With the development of the global economy and the advancement of science and technology, the scope of application of tungsten has been expanded and the demand is strong. However, the global reserves of tungsten resources are extremely low and the level of protection is not high. Many countries have included it in the list of strategic reserves, and their status is very prominent. 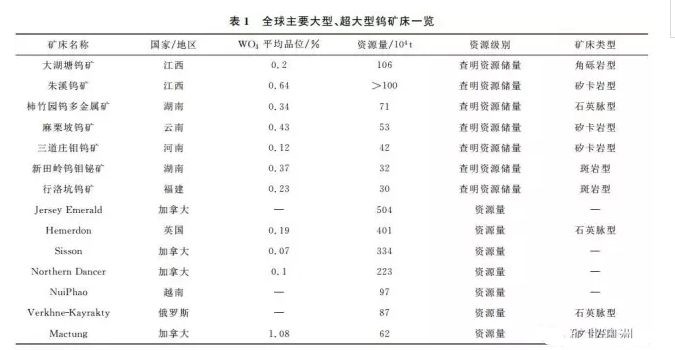 [1.3 New Progress in the Exploration of Tungsten Mines]

Due to the strategic significance of tungsten, the global tungsten mine exploration continues to invest. In 2014, Sisson tungsten mine, the flagship project of Canada's HDI Group, with 3.34 million tons of resources, is raising funds, planning advanced exploration and production. The Jersey tungsten mine in Canada, with a proven reserve of 5.04 million tons, is scheduled to be put into operation. Since the implementation of the ore-prospecting breakthrough strategy, the tungsten exploration investment in China has reached an annual average of about 300 million yuan, and large tungsten deposits such as Dahutang and Zhuxi have been discovered. In 2014, a large-scale porphyry-type tungsten deposit was discovered in Hunan. From 2006 to 2013, China ascertained that the reserves of tungsten resources have increased from 5.584 million tons to 7.041 million tons, and cumulative reserves have increased by 1.43 million tons, with an average annual growth rate of 3.7%. In the period from 2006 to 2013, China newly identified tungsten reserves of 2,244,400 tons, with an average annual increase of 336,600 tons of reserves, especially the discovery of the 2012 large tungsten deposit in Dahutang, Jiangxi Province, which enabled the tungsten deposits to increase their discovered resource reserves in 2012. The highest historically 1.016 million tons.

According to USGS statistics, compared with 1974, the global supply and demand pattern of tungsten resources in 2014 has undergone major changes. China is rich in tungsten resources, with a supply of 68,000 tons, up to 84.5%, and a demand of 34,000 tons, up to 53%. In 2014, the global supply of tungsten ore was concentrated in five countries: China, Russia, Canada, Bolivia, and Vietnam. The supply ratio was as high as 98%. In 2014, the global tungsten consumer countries mainly came from the United States, China, Japan, and Russia. The four countries accounted for global demand. The proportion is as high as 74%, of which Japan consumes 0.7 million tons, the United States consumes 0.4 million tons, and China consumes 34,000 tons. In 2014, the global supply and demand pattern of tungsten resources was more concentrated, from 14 countries in 1974 to five countries in 2014. In addition, the tungsten mines in the world experienced severe overcapacity and oversupply of 20,000 tons. The international tungsten price is low (Figure 3).

The supply of tungsten resources in China has undergone major changes during the past 30 years. For example, supply has changed from 22.6% to 82.5% and demand has changed from 5.39% to 53%.

[5.1 increase investment in tungsten exploration and pay attention to wolframite; increase scheelite mining technology and process at the same time]

Although China's tungsten resource reserves are abundant, but the quality is low, the proportion of scheelite that is difficult to pick is increasing. Excessive exploitation and excessive exports cause the obvious decline in the advantages of tungsten resources.

In recent years, tungsten ore exploration has made some progress. Thanks to continuous investment in exploration, on the one hand, it suggests continuous high investment in tungsten exploration, especially for high-grade, easily-acquired wolframite. On the other hand, the cooperation between enterprises and scientific research institutes should be strengthened to increase the selection and technology of scheelite, so as to increase the overall cost advantage of tungsten mines in China.

[5.2 Policies to Reduce Taxes and Expenses, Resolve Overcapacity and Share the Period of Mining Downturn]

Due to the overcapacity of tungsten mines in recent years, tungsten prices have continued to slump. The operating profits of tungsten mining companies such as Xiamen Tungsten Industry and Zhangyuan Tungsten Industry have dropped drastically, and some companies are facing losses and production shutdowns. It is suggested that the state should provide phased preferential treatment for tungsten enterprises from the policy level to help enterprises to cope with the mining downturn. On the one hand, it has reduced or even eliminated tungsten tariffs and increased sales of tungsten abroad. On the other hand, the resource tax for tungsten mines and the compensation for mineral resources should be appropriately reduced, and enterprises should be allowed to use the reclaiming deposit for mining land temporarily to improve their operational efficiency.

[5.3 Layout of new growth points ahead of schedule, focusing on recycled tungsten]

The vertex of tungsten consumption in China has yet to come. India and ASEAN will become the main driving force for tungsten consumption in the future. The dependence of developed countries on regenerative tungsten is increasing. On the one hand, it is proposed to lay out the exploration of tungsten resources in Central Asia and the ASEAN region on the one hand, and on the other hand, pay attention to the utilization and market of recycled tungsten, increase the utilization of tungsten tungsten in domestic wastes, and timely intervene in the regenerative tungsten market in developed countries with appropriate investments. Relieve the growth pressure of Chinaâ€™s future tungsten consumption, and control the supply of international tungsten ore from the downstream to increase the price of tungsten.

[5.4 Grasp the "One Belt and One Road" Strategy to Gain Overseas Resources]

With the global mining downturn, the market value of tungsten mining companies will soon bottom out. Canada and other large tungsten producers will actively welcome Chinese investors to invest in Sisson and other large-scale tungsten projects. The implementation of the â€œOne Belt One Roadâ€ national strategy includes important tungsten along Russia, Vietnam and Turkey. Resource countries, which are already important tungsten mineral deposits at the time of investment, China should maintain a certain degree of global supply, base on domestic resource security, maximize the sharing of overseas resources, and strengthen resources to â€œgo globalâ€ efforts. Share the important period of resource dividends of subsequent industrialized countries such as ASEAN and India. We should actively acquire overseas high-quality resources as a long-term strategy for a country, and gradually realize the transfer of mineral resources and related industries to countries such as Africa, ASEAN, and Central Asia.

Mono Calcium Phosphate ,the chemical formula is  Ca (H2PO4)2.H2O, molecular weight of the body is 252.06, after dryed the product is white or slightly yellow micro powder or granules, the relative density of 2.22 (16 Â°C). Slightly hygroscopic, soluble in hydrochloric acid, nitric acid, slightly soluble in cold water, almost insoluble in ethanol. At 30 Â°C, 100 ml of water soluble MCP 1.8g. The aqueous solution was acidic, heating the aqueous solution can get calcium hydrogen phosphate. Lose crystal water at 109 Â°C and decomposed into calcium metaphosphate at 203Â°C. Applications:Monocalcium Phosphate is used to supply mineral nutrition such as phosphorus (P) and calcium (Ca) for animal, which can be easily digested and absorbed. Extensively applied as additives of Phosphorous and Calcium in aquatic animals feed.Higher water solubility of MCP is required in aquatic animals feed.